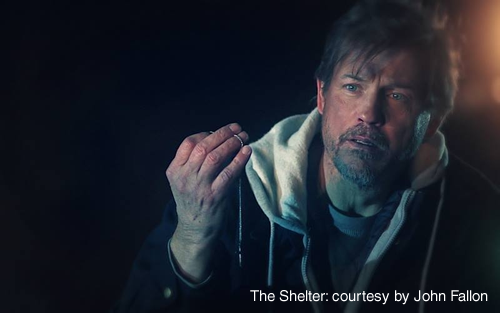 Hello everyone! The Shelter is a movie I made with John Fallon. John has been reviewing and critiquing films for about 20 years for and with Joblo.com this was his first time directing and he also wrote the screenplay.

The movie really is about how fragile and irrational we humans are. Betrayal, lies, deceit, lust, infidelity, selfishness, guilt and self loathing are the demonic forces at play. I seem to be helpless when confronted by these deadly sins and peoples reactions to my weakness is far from logical but motivated by their own demons.

From the very beginning this project was a work of passion on Johns part and once I read it I realized it would have to be on my part also. His production staff and his crew ‘the Holbrooks,’ were all very inspired too. I can’t wait to see the trailer which should be online soon.