I have done a musical comedy with Joe Piscopo and Paul Sorvino. HOW SWEET IT IS is the title and is directed by Brian Herzlinger and produced by Suzanne DeLaurentiis, the same who produced the movie I did with Rod Steiger, A MONTH OF SUNDAYS. My character is Mike Sorino. I play son of Paul Sorvino. Paul is a mafia Don, Joe Piscopo is a down and out producer who owes my father gambling money. When Paul finds out who Joe is he forces him to produce a show for him.

On the set of How Sweet It Is: Michael Paré with Joe Piscopo

This hilarious musical comedy HOW SWEET IT IS opens May 10, 2013 in AMC Theaters LA, NY, NJ. Let’s go see the movie and you realize how sweet your life is! – Blog Concierge

Thank you Comstock for releasing Sea Tremors all across Japan.

This was a real adventure in film making. Three months we were in Indonesia, two months in Jakarta and one month in a small village on the coast where we could see Krakatoa the famous active volcano in the near distance. There was even an earth quake that through me out of bed one morning. I thought I was in a nightmare or hallucinating.

I hope all of our friends in Japan enjoy the film, it is really a fun traditional monster movie where an ancient breed of sea creature is released from a fossilized sea cavern by the underwater earth quake, that crossed with stone age magic makes for a fun story. 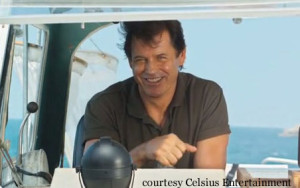