Well this is how I got involved with “Sparks” the “motion comic” project.
I first got a call from Dennis “Danger” Madalone who was the stunt coordinator for The Greatest American Hero. Dennis told me about an effort being made by Billy Katt, the lead of Greatest American Hero to make an action comic of GAH . Billy called me to ask if I would be interested in doing Tony Villicana‘s voice for the project and also would I participate in a reunion of the cast of GAH? I said that all sounds like fun and it was. I’m not sure how people will get to see it but Billy, Robert Culp and Connie Sellecca were there as well as Stephen Cannell the producers and a couple of directors and of course Dennis Madalone. We all talked and reminisced on a panel while footage and out takes were being projected on a screen behind us and it was a lot of fun.
While this was all going on I met the comic creators and the computer guy Chris Folino and “Huff”. They later called me to talk about another comic they wanted to produce with me as the lead voice actor, “Sparks”. They came up to meet me and brought the paper comic of Sparks and told me the basic story and it all sounded interesting. Voice over work in Hollywood is a very guarded society and very hard to break into so I thought if nothing else I would like to try since I’ve never done voice over before. 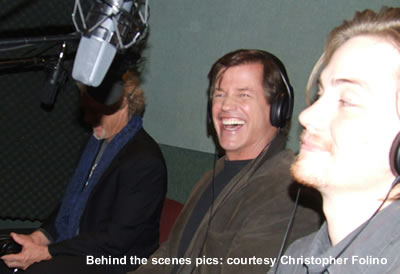 We all, Billy, Michael Bell, Brill and myself met at a voice over studio and recorded the first book and a few weeks later re-recorded the same and that was all I had to do.
Huff and Chris went to work doing what they do. They both have a company called Sideshow that produces trailers for Gamers and Movies so they had tremendous experience working in this medium of short story.
I’ve since seen the finished product of Book 1 and am very proud of my involvement. I believe it will be an interesting new venue which is always fun.