I said goodbye to my family and friends and started on a new adventure.
As things turned out I was called for a screen test for Franco Zeffirelli’s Endless Love starring Brooke Shields the day I was to leave for L.A. and The Greatest American Hero I did the test but when they said I would have to wait in New York for some reason I said sorry I have a plane to catch and grabbed a cab for the airport. 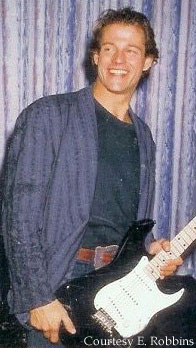 I woke up in what used to be the Holiday Inn on Highland and Hollywood Blvd. My curtains were wide open and I could see the Hollywood sign. So I knew it wasn’t a dream. I ordered room service and discovered my tab was covered!! I ate just about every meal in my room except when someone from ABC or Stephen Cannell’s company needed to see me.
Stephen Cannell took me to lunch at Muso Franks a famous Hollywood eatery where stars going all the way back to the silent movies ate. I wasn’t quite sure who Stephen was until Joyce Selznick told me he would be my future boss. Stephen even lent me a car to use while I searched for an apartment to live in. I had never had a car available to me before so I did what guys in the movies did with parking tickets when they were issued, I threw them away. This later caught up to me when we started shooting GAH and they took the teamster captain away in hand cuffs for outstanding warrants. I never apologized to Stumpy the teamster captain for that, which I regret.
Stephen held a read through of the script for GAH and I got to meet all the cast, Don Cervantes and Faye Grant and I quickly became friends and it turned out we all lived in the same neighborhood; so Faye would pick us up and we became really good friends for a while. As things turned out before we could start shooting the actors went on strike so there I was in L.A. with nothing to do but go back to acting class and wait.
Joyce Selznick and her Partner Jan McCormick had me over to their house quite a bit and Joyce became my unofficial Manager. She was under contract to ABC at the time.